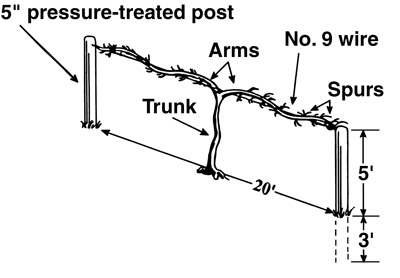 A properly trained vine has a trunk, two arms and fruiting spurs. The first two years of training are devoted to developing the permanent trunk and fruiting arms. In the spring following planting, each plant will produce three or four shoots. When these shoots are about one foot long, select the strongest and remove all the others. Tie a string to a small stake. Drive the stake in the ground about three inches from the plant. Since muscadine fruit are borne on new shoots arising from last year’s growth, you should annually prune back the canes that grew the previous year, leaving about three inches of growth to form spurs. Prune in February or early March. Don’t be alarmed if the vines “bleed” at pruning cuts. Bleeding does not harm the vines.

When you leave too many buds on the vine, the plant over-produces and the grapes are poor. After three or four years of production, you will need to remove every other spur cluster to prevent overcrowding. Try to leave spurs that are on the top of the arms.