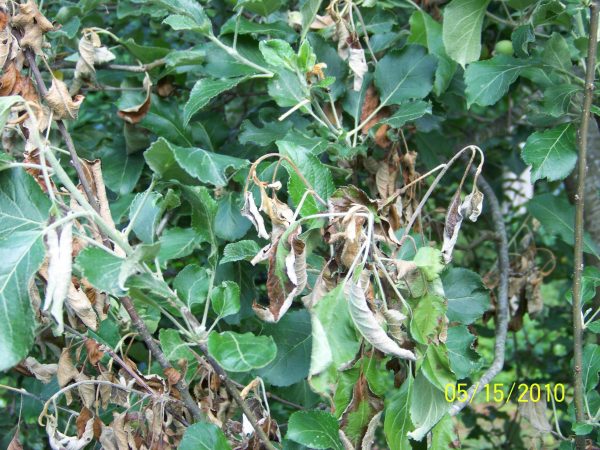 The time to think about fireblight management using sprays is just before and during bloom, so late March may be too late for most trees. Once the bacterium gets into the blooms there is not much to be done except to cut out any diseased branches later in the year. A streptomycin spray could be applied as blooms fall for secondary spread, but most of the damage has probably been done at that point, depending on whether it was a bad year. Applying copper sprays may damage the young foliage (see end for spray recommendations).

Fireblight is difficult to control even for commercial growers. For the homeowner, being able to spray trees repeatedly with good coverage and at the right time can get complicated so the most important method of management is to start with plant varieties that have some resistance.

Most of the better known pear varieties, such as ‘Bartlett’ and ‘Comice’, are highly susceptible and cannot be grown in the East. There are some pears that can be grown here such as ‘Orient’, ‘Baldwin’ ‘Carrick’, ‘Kieffer’ and ‘Warren’.

Apple varieties such as ‘Gala’, ‘Fuji’, and ‘Pink Lady’ are susceptible and should not be planted. Unfortunately, I see these varieties for sale. ‘Gold Rush’, ‘Suncrisp’, ‘Arkansas Black’, and ‘Cameo’ have some resistance to fire blight and other diseases, and are better suited for the southeast (we do not have the best climate for apple production unless you live in the mountains and these varieties are somewhat adapted to our conditions). The type of rootstock can also contribute susceptibility, but often the homeowner does not have a choice in this.

If these relatively resistant varieties are used, fireblight sprays may not be necessary, especially if cultural methods are used such as cutting out blighted branches and not using too much nitrogen. These more resistance varieties may get some fireblight on some shoots in a bad year but the difference is that the infection will generally not progress down the branches and kill the tree. Young trees during the first few years are going to sustain the most damage since a small amount of blight may kill an entire scaffold branch, and this stage would be the most important to protect with sprays. Older trees, especially if they are somewhat resistant, will tolerate a certain amount of blight without any real harm. A homeowner should not get too alarmed if a few shoots are infected in a bad year, although cutting them out 12 ” below the infection, if possible, during the summer or fall is recommended to prevent infections the next year.

are the two choices. If these compounds are used repeatedly, the bacterium can develop resistance to both of these compounds resulting in the sprays no longer being effective. For best results they should only be used when necessary and at recommended amounts. Fireblight develops during bloom if the temperatures are between 60 and 80 and it is humid or raining. The bacterium needs moisture to reproduce and move around. If these conditions are predicted then that would be the time to spray within 24 hours of these conditions. It will probably take two or three sprays: a copper spray during green tip if there has been significant disease in previous years, and streptomycin during pink and bloom, ideally based on weather conditions.

Copper sprays can be phytotoxic and russet fruit on certain varieties, especially green fruited varieties. Phytotoxicity is worse when coppers are applied during cool wet weather or in excessive amounts. Coppers are best used for the first spray at green tip to avoid phytotoxicity issues and streptomycin is best used during bloom.