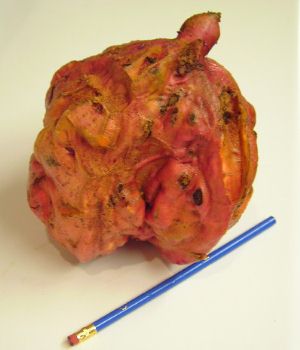 Q: We harvested many sweet potatoes from our garden recently. A few were deformed and very large. What causes the deformity? Most of the potatoes were shaped nicely. Even though they were odd looking they still were good eating.

A: Looks like sweet potato wireworms have had a good meal in your garden. The wireworm is the larval form of the click beetle, which I used to turn upside down when I was kid, just to watch it vigorously “click” into an upright position.

No insecticides are labeled for use against wireworms in a garden. Trap wireworms in pieces of potato scattered around the garden, rotate crops and plow or cultivate infested soil in late summer or in autumn to kill or expose various insect stages to predators. Cultivation in the spring, well in advance of planting can help reduce wireworm populations.

Consider releasing insect-killing nematodes in your potato rows. Scroll to the bottom of the following publication for more  information.

Wireworm control is difficult. One tip is to till your potato beds twice during the coldest part of winter (Jan – March). This will kill some of the larvae.

Another tip takes advantage of wireworms’ preference for carrots. A month after you plant your potato slips, buy a bag of big carrots at the grocery and bury one between each of your potato plants. Mark the burial spots and dig the carrots each week to examine for wireworms. They can be knocked off and killed and the carrots reburied again.

Good gardener Brent L. reports: Tried the carrot trick a couple of times. Within 7 days one carrot had wireworms on it while three others about 1 foot apart had no signs. Did it a second time in another area close to where the first buried carrot had worms and it too had worms on it and in it! Again carrots buried a few feet away had no signs of being eaten. Key is to wait only 4-5 days and not 8-10 days as that is too long to catch anything (totally devoured!).

The sweet potato varieties ‘Jewel’, ‘Nugget’ and ‘All Gold’ possess some wireworm resistance, while ‘Resisto’ and ‘Regal’ have even more. ‘Beauregard’, ‘Pope’, ‘Hernandez’, and ‘Cordner’ have low resistance or none.