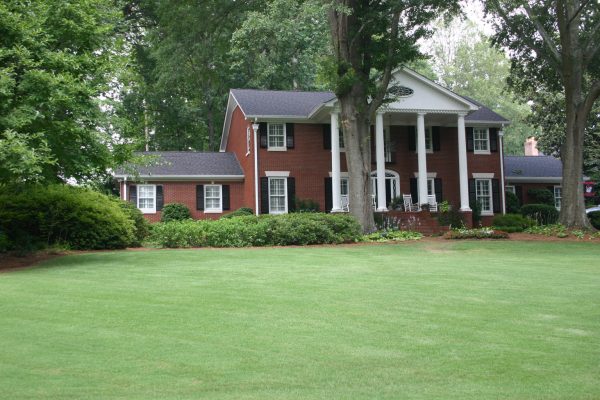 The first and most important question to ask is how much sun will be available to the grass. It is much better to use a grass that will grow in the conditions available rather than fighting the environment year after year. Fescue grass will tolerate more shade, while bermudagrass would be a better choice for full sun locations. Centipedegrass on the other hand can be grown with little or no fertilizer.

The second question is how much can you afford to spend. Seeding is usually cheaper but sodding will look the best in a short time. Fescue will usually need to be overseeded every two years but the creeping grasses will cover an area without new seed each year.

For very large areas that receive little maintenance, Kentucky 31 fescue or common bermudagrass may be the best choices. Small, high impact areas may need a turf type fescue or a sodded bermudagrass.

It is far better to determine which grass matches the conditions of the area before you plant rather than finding out by experience two years later.

Bermudagrass: newer varieties with a bit of shade tolerance can thrive in light shade (see below)

Since light levels are hard to define, use these examples:

Dense shade: No direct sunshine touches the grass all day, such as the shade under a southern magnolia or the shade between two houses whose shadows prevent sunshine from hitting the earth at all.

No grass will grow well in shade or dense shade. If you have a shady spot, save yourself some grief and plant groundcover or cover the spot with mulch.

TOO-GOOD-TO-BE-TRUE GRASSES
You have probably seen the full page advertisements in the Sunday paper touting “Amazing Turf!” or “Miracle Grass!”. Claims are made that the grass is lush, drought tolerant and adapted to much of the United States.
>While there is a small amount of truth in each advertisement, rest assured that if such a grass did exist, it would be quite an achievement.
>The best advice regarding miracle grasses is “Buyer Beware!”