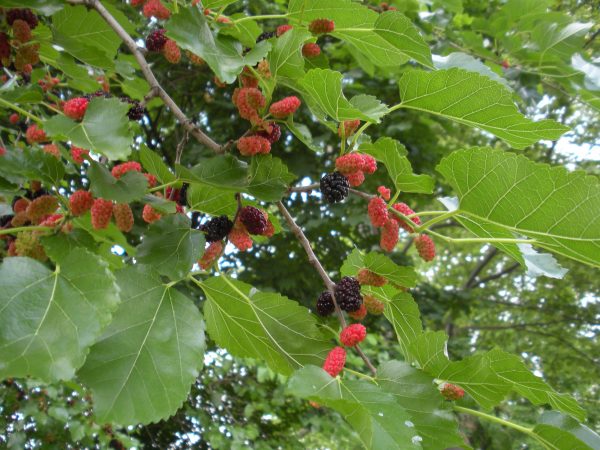 I’m often asked to identify “that tree that has lots of blackberries hanging from it!”. Most often it is a white mulberry, Morus alba.

The mulberry was originally imported from China in the 1600’s to feed silkworms in an effort to start the silk industry in the Americas. Silkworms wouldn’t grow here – but the mulberry tree certainly does. It is generally considered a weed tree because of the mess birds make after eating the fruit. Buy a cover for all your vehicles when you plant mulberry seedlings!

The wild fruit is edible by humans but in my opinion is a poor substitute for a July-ripe blackberry. The fruit of cultivated varieties is much sweeter.

The red mulberry, Morus rubra, is less common but still has blackberry-like fruit and leaves that can be lobed or unlobed.

You can usually tell them apart by putting the edge of a leaf in your mouth: the leaf of red mulberry is fuzzy underneath while the underside of a white mulberry is smooth.

To confuse things even further, paper mulberry, Broussonetia papyrifera, has leaves darn similar to the trees above but the fruit is more of an orange, spiky ball.

If you are interested in identifying any of these trees, this publication from Purdue lays it all out.